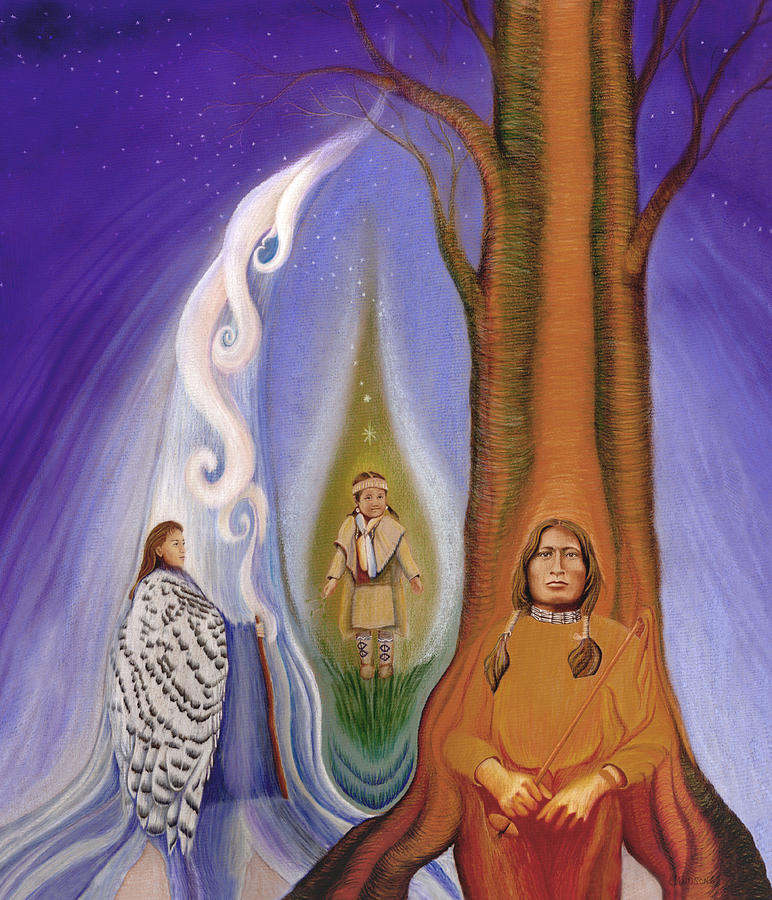 After studying a historic photograph of One Bull, nephew of Sitting Bull, and drawing every contour of his face, I feel he has come alive to me. The photograph of this Minneconjou Sioux Warrior was taken in 1882. The act of drawing him eliminated the distance of time. He feels as real to me as the foundation of this rooted tree.

In this image, the child is standing in an open portal between the man and woman. She is part of the future generation. When I sense who she is I feel a strong spiritual leader who is bold and innovative in moving groups of people. The woman has her left hand on a staff and her right arm is shape shifted into a Snowy Owl wing.

While I was drawing this picture story, I found myself unable to finish the last small area between the staff the woman is holding and the Owl wing. I did not understand until I gave a Craniosacral session that had a most unusual outcome. My new client was a sixty-three year old woman who had a stroke thirty years earlier, when she was thirty-three. She recovered well but still lived with a loss of strength on her left side. Eight minutes into the session I felt an intense overwhelm through my brain. I had to take my hands off of her and sit back. I wondered if I was empathetically experiencing her stroke. It felt like a Tsunami drained the blood out of my frontal cortex and slammed me down with a crash. I heard a roaring in my ears then my awareness quickly faded out like a blackened screen, and I became unconscious. I traveled like light, passing through a portal of extraordinary beauty. I came out of the portal and arrived in a sky that was beyond comparison with what I know on earth. I could see every star with clarity. I was in a realm that was beyond three dimensions. I began to sense there were three women talking to me. They were above me in the sky or maybe they were what the sky was made of. I could understand the closest one was telepathically telling me, "It was your own soul that brought you here, we did not bring you. You are made of the same source as us. You are us, now in human form."

After I came back to consciousness, and recovered I went home and finished the drawing. When I was done I sat back and looked at what had unfolded before me. I realized the space I had finally finished was the gateway of the portal I had gone through. The upward spiral represents me out of human form going up to meet the three divine feminine beings coming down as the waterfall. I drew the setting then directly experienced myself in the scene. I was only able to finish drawing the missing doorway after I had gone through it. I sat astounded for over an hour just taking in that I had experienced being in one of my drawings.
�Robin Landsong 2011

If you enjoyed reading this story, I invite you to follow my page as I will continue to give updates on the book progress and public readings.

Thanks, it was quite a journey process while I made it. I felt like a changed person when it was done.